A Garden Left in Tiers

With the late summer rains of 2011 came movement and tension cracks in the steeply banked garden at a house know as Foxbank on the Cleobury Road in Bewdley, Co. Worcestershire.

Power supply poles in the garden began to tilt and sewage pipes began to fracture, with extremely unpleasant consequences. The existing brick retaining wall had failed, as it was now causing significant dangers to the life, health and well-being of the residents and threatening the property itself, a new wall would have to be designed and constructed.

P and S Consulting Engineers (PaSCoE) were commissioned to prepare a design, drawings and a bill of quantities for a replacement wall, which on completion was put out to tender with WM Longreach winning the project.

While it was necessary that the replacement retaining wall should provide long term performance, drainage of the slope itself and accommodate the sewage system that passed through the site. It was also necessary as this was after all, a residential garden it was decided that the new wall should also be aesthetically pleasing to the homeowners. It was for these reasons that an Allan Block Retaining Wall was chosen.

The Allan Block chosen to perform the task was the AB Classsic, this was used in conjunction with a Fortrac Geogrid, aggregate backfill material and a piped drainage system. With the Client selecting the precise colour of block they wanted which added greatly to the acceptability of the solution,

The Allan Block system was also flexible to allow steps and tiers to be formed in the wall, with the initial wall being 2m high, with a further wall being constructed, some 1.3m behind it, at a height of 1.4m. Again, providing a pleasing appearance, by breaking up the wall and allowing in more light to the rear of the property.

When construction of the wall was completed, the finished Allan Block Wall proved to be extremely successful, with its flexibility and aesthetic appearance being particularly significant, whilst being sound from a technical perspective. With the project winning an award at the Ground Engineering Awards in the UK Project with a Geotechnical Value up to £1M Category. 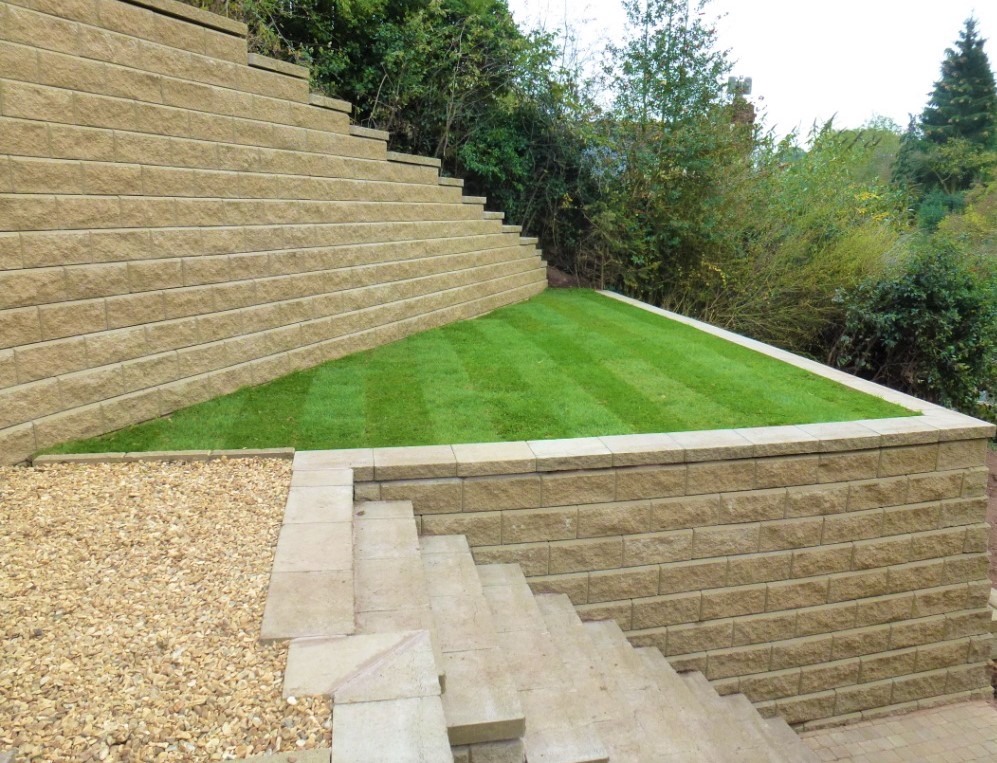